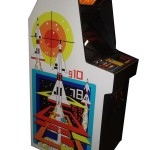 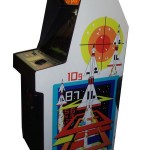 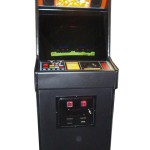 Upright trackball game, classic.  You must save your cities from the incoming missiles.  This is one of Atari’s classic arcade games.  Missile Command was made in 1980.   You can get this game fully restored with new side art for an extra $900.  You can upgrade the monitor to a LCD for an extra $250.

Missile Command is considered one of the great classic video games from the Golden Age of Arcade Games. The game is also interesting in its manifestation of the Cold War’s effects on popular culture, in that the game features an implementation of National Missile Defense and parallels real life nuclear war. The game’s designer,

Dave Theurer, suffered from nightmares about nuclear War for decades after creating it.