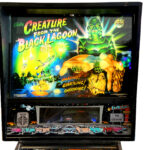 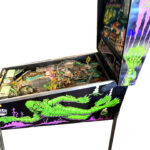 Tonight’s drive-in movie is the Creature from the Black Lagoon pinball machine! Clawing monster from A Lost Age strikes from the Amazon’s forbidden depths! Grab your popcorn and a box of milk duds, roll out the blankets in the back of the station wagon, make sure you brought plates for the pizza, and get ready for the fearsome green creature from the jungle to arrive on a giant projection screen!

But who is this mysterious creature truly? As the scientists see it, the Gill-man is simply a savage reptile eerily haunting them as they explore the jungles of South America. But what if he’s so much more than that? A reptile man with centuries of passion pent up in his savage heart! The Creature from a million years ago!… every man his mortal enemy… and a woman’s beauty his prey!?

Discover the mysteries of the jungle as you enjoy this classic, movie-themed machine in your game room.

Own the pinball machine that made history! Creature from the Black Lagoon was the first pinball machine to feature an Animated 3-D Hologram! As a part of the storyline of the playfield you have a chance to unlock the 3-D holographic animation which reveals the Gill-man creature in shocking realism!

You’ll be stunned to learn that in addition to historic 3-D Hologram technology, this pinball machine also features Creature movie scenes and gives multiple opportunities for players to participate in the playfield story! This is a rich play experience as would be expected from a newer machine with solid state electronics on board.

It’s no surprise that this machine was originally manufactured in 1992, a full 40 years after the original movie was released in 1954! This makes Creature from the Black Lagoon a modern pinball machine with extremely robust gameplay features and all the bells and whistles you would expect from a movie pinball machine.

AMAZING! The drive-in classic of the ’50s is now classic pinball for the ’90s!

Only Bally could combine the excitement of Universal’s classic monster flick with the fun of a drive-in movie date. And when nostalgia meets high-tech pinball wizardry, the results are breathtaking!

With a record-breaking 16 play modes, two-ball multiball play, a fast-paced chase-and-rescue sequence, patented Dot-Motion animation… even a 3-D appearance by the CREATURE himself, CREATURE FROM THE BLACK LAGOON pinball machine makes waves!

Five fifties’ favorites — including “Get a Job” and “Rock Around the Clock” — play on a three-per-day rotation for variety and increased nostalgia appeal.

Holographic technology reaches pinball for the first time ever. Following the completion of the chase-and-rescue sequence, the CREATURE appears at the bottom of h is own black lagoon, reaching out with slime-covered flippers to take a swipe at players in incredible 3-D realism.

Bally’s engineers have broken the dot-matrix animation sound barrier to create genuine Synchro-Sound segments. Dot-Mation sequences feature CREATURE movie scenes, and also give players an opportunity to kiss their dates, punch out a Peeping Tom, order from the snack bar, get revenge on a view-blocking van and rack up Big Millions, Mega Millions and Unlimited Millions!

Save the beauty, see the beast as the CREATURE appears in the first-ever pinball hologram!

Looking for a double feature?

Check out our many movie-themed machines!

Click to check out the International Pinball Machine Database listing on this pinball machine.