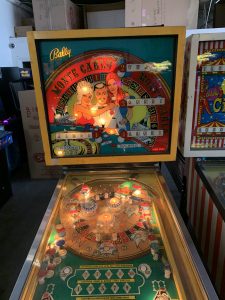 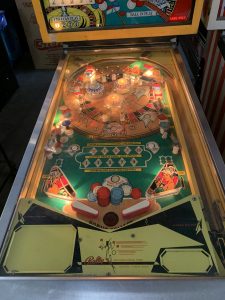 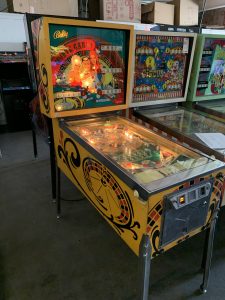 This is the beautiful Monte Carlo Pinball Machine made in March of 1973.

It was designed by Jim Patla

This is a gorgeous roulette themed pinball created by Bally. It is lively and entertaining to play! Keeping its theme all around, this game gives you opportunities to score big when lighting up the red or black numbers.

SCORING ACTION STARTS at the top of playfield as balls cross Buttons numbered 1 through 10, lighting the corresponding numbers in Odds and Evens Panel.

WIN EXTRA BALL PLUS 5000 by shooting ball in Top Kickout Hole, after all Even numbers are lit. Ball in hole normally scores 500, and raises Play-More Post at all times.

SCORES SPECIAL PLUS 4000 bu shooting ball through Top Gate which opens (a) when all Odd and Even numbers are lit of (b) when ball hits Blue Mushroom Gate return to field for further action.

SCORE 5000 by shooting ball in Central Kickout Hole. After all Odd numbers are lit. Ball in Central hole normally scores 500, ups Play-More Post at all times.

OUT-HOLE BONUS FEATURE scores 1000 for each Odd or Even Number lit when ball since in out-hole.

SPOT-NUMBER FEATURE spots mystery-lit numbers around rim of roulette wheel by shooting ball in Top Kickout Hole to spot Even numbers or in Central Hole to spot Odd numbers.

SCORE 1000 as ball exits through either Left or Right Out-Lane.