*The game pictured has been fully restored. 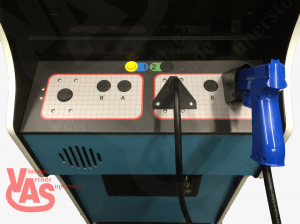 The Duck Hunt arcade game is a light-gun shooting game, released by Nintendo in the mid-80s (Japanese Release: April, 21 1984, North American Release: October 18, 1985). The game was originally released as part of the Nintendo Vs. System and is included as a part of the Playchoice-10 series.

The objective Duck Hunt is fairly straight forward. Players use the Nintendo Light Gun to shoot a series of targets within a time limit. In order to advance to the next round of play, Players must successfully shoot a minimum number of targets. If a player fails to shoot enough of the designated targets they will get a Game Over screen. The Duck Hunt arcade game could be played solo or against a friend by alternating between rounds of shooting.

At Vintage Arcade Superstore we take the time to ensure that your arcade game runs excellently. Our version of Duck Hunt also comes with a new adapter board and Happ gun that allow for greater accuracy and improved range with a light gun.