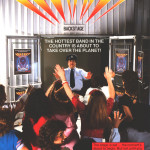 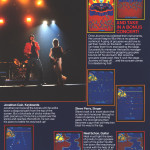 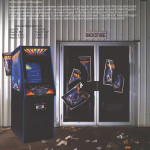 Due to the tremendous success of the band Journey and their albums: Escape and Frontiers, Bally Midway created and released the Journey arcade game in 1983. The arcade game begins with all five members of Journey (Steve Perry, Jonathan Cain, Ross Valory, Steven Smith and Neal Schon) jumping into the band’s Scarab vehicle. Each band member is represented by a pixel body with digitized photos of the actual band members faces.

The game itself is broken down into a series of 5 minigames, where the player is tasked with helping the members of the band re-acquire their instruments in time for a concert. The Scarab vehicle lands on a different planet for each band member. Descriptions of the gameplay for each planet as as follows, courtesy of KLOV:

Once all five planets have been visited and the instruments retrieved, the band then goes on to play at a concert. The player takes on the role of Herbie, Journey’s tour manager, and must block the doorway to prevent fans from swarming members of the band and stealing their hard-won instruments. Upon completion of each minigame, players hear a cassette play one of many popular Journey songs, including: Do not Stop Believin’, Stone in Love, Lights, Wheel in the Sky, Chain Reaction, Still They Ride and a cassette of Separate Ways Worlds Apart.

The Journey arcade game is quite rare and collectible. Vintage Arcade Superstore has this particular game for sale–all original, including original artwork. For an additional $600, the game’s art can be restored just like new.