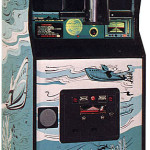 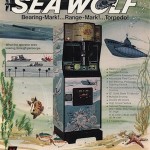 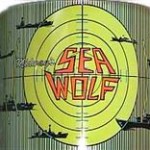 The large periscope and memorable sound effects (submarine sonar pings and racing PT boats) made Sea Wolf an early favorite in 1970s arcades, maintaining popularity into the 1980s even against the more sophisticated space-themed games of that next era. It is rare to find one of these working, and in this condition they are very rare.

The Sea Wolf arcade game was released in 1976 and based on an electro-mechanical, coin-operated game called Sea Devil. Sea Devil, in turn, was based  on Sega’s submarine simulator, Periscope. The Midway video game eventually sold more than 10,000 arcade units. In 1978, Midway released a colored sequel to their hit game, called Sea Wolf II.

By looking through the periscope mounted on the game, players may take aim and fire torpedoes at ships and other objects on the surface of the ocean. The periscope swivels left and right, true to real submarines. Players can destroy a handful of different targets on the surface of the ocean: floating mines that can be dangerous obstructions, fast-moving PT boats and destroyers.

The original Sea Wolf arcade game is black and white, oriented horizontally, and makes use of a simple blue overlay to denote the color of the water. Each time players land a proper hit on a ship, a light is reflected inside the scope to simulate an explosion. The game also includes basic sounds like PT boat motors and sonar pings. Another unique feature of the Sea Wolf arcade game is that it displays both the current score of the player as well as the game’s high score—it was one of the first arcade games to incorporate high scores.