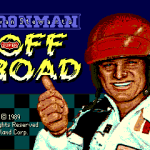 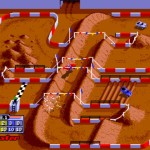 The game has eight tracks available for players to race on: Sidewinder, Wipeout, Blaster, Fandango, Huevos Grande, Cliffhanger, Big Dukes and Hurricane Gultch. At the beginning of each round, players are also given the chance to enter their initials and select a nationality from the following groups: United States, Mexico, Canada, Japan, Great Britain, Australia, Italy, Germany and France.

There are a handful of ways that players can earn money—by collecting the bags of cash scattered throughout the course, by adding credits to the game, or by placing well during the race. Players are awarded cash prizes for finishing first, second or third during each race. The prize for first place is $100,000, for second it’s $80,000 and for third it’s $70,000. Those cash winnings can then be used to upgrade player trucks with new parts including: