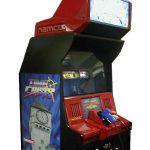 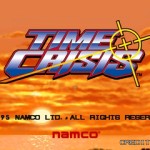 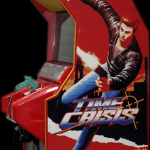 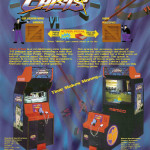 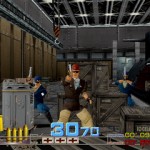 Time Crisis is stand-up arcade game and 3D first-person rail shooter game. Released by Namco in 1996, the Time Crisis arcade game was almost an immediate hit. The game was so popular that Time Crisis 2 was released in 1998, only two years later. Ultimately it became the first arcade game in the popular Time Crisis game series.

The Time Crisis arcade game is set in 1995 and revolves around the series of events that occur in the aftermath of actions taken by an international protection agency called V.S.S.E. The agency choose to aid rebel forces in the Sercian Republic. The V.S.S.E. played a major part in overturning a century-old  authoritarian regime by helping Sercian opposition leader, William McPhearson, gain control of the region. McPhearson goes on to be elected president of the new Sercian Republic. Unfortunately, the last survivor of the old regime, Sherudo Garo, then launches a battery of attacks and calculated assassinations with the aim of destabilizing the entire country. The crowning move on Garo’s part was then to kidnap Rachel, the daughter of President McPhearson, with the aim of exchanging sensitive military secrets for her life.

In the Time Crisis arcade game, players assume the point of view of Richard Miller, a “One Man Army” sent on a mission to save Rachel from the clutches. Each area that the player visits must be cleared within the time limit specified by the game. The special pedal at the bottom of the cabinet allows players to move in and out of hiding to exchange fire with enemies, reload and prepare for the next wave of bad guys.