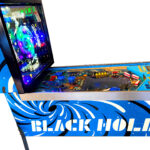 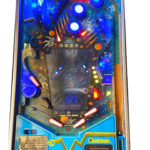 Have you ever wondered what it feels like to be sucked into a black hole? Rays of light streak by, a rainbow of light flashes light up your eyes, hectic sounds come from everywhere all at once,  3 metallic balls race at an unfathomable speed towards you, and all the while the points counter keeps going higher and higher!

Feel the exhilaration of the game on this one-of-a-kind playfield from Gottlieb! Unlock up to 3 Multiballs at a time on a 2-level playfield! This intense gameplay is one of the hardest multiballs to unlock in the pinball machine world, and it’s incredibly rewarding once you get all 3 balls into play! Intense scoring action is possible but you’ll have a hard time keeping all three balls from getting sucked into the Black Hole!

The Black Hole Pinball Machine is a unique pinball machine with features that are rarely seen. The most notable feature you will notice standing in front of the machine is the Widebody style which allows the designers to pack in even more amazing gameplay features like the split level playfield.

The pinball machine also features top of the line solid state electronics, mechanical backbox animations and an exciting 3-ball multiball mode. Additionally this was the first pinball machine to ever offer a second playfield sloped away from the player. The lower playfield features flippers at the backbox end for a unique perspective of playing backwards!

Contrary to popular belief, the Black Hole Pinball Machine was not based on the 1979 movie of the same name made by the Walt Disney company among other contributors. While it wasn’t a box office blow out, Black Hole was a widely-known production in the film industry for it’s award-winning graphics provided by the cutting-edge Walt Disney video team.

However, there exists much more tangible evidence for the origins of the idea and creation of this machine. For this information we dive deep into the archives of internet history to find an article surfaced by the Internet Pinball Machine Database (IPMD) that is about the exact origin of this machine. The machine was originally a concept machine created by Jim Capp, Joe Cicak and Jerry Yingst at the end of 1981 and it was known as Critical Mass. For more information about the Critical Mass prototype pinball machine please click here.

Note: These are photos of the actual game you can purchase!

Black Hole features a hidden playfield inside the cabinet, visible to the player through the upper playfield window.

BLACK HOLE IS THE HIGHEST EARNING PIN. EVER.

An amazing thing has happened.

Gottlieb’s superb new pinball game is breaking earning records all over – even topping all video in many locations. It’s the highest earning pin game in the history of the industry, and the first accepted at 50 cents play.

Check the earnings reports… tap your grapevine… then call your local Gottlieb Distributor.

Looking for something else?

Click to browse online through our extensive showroom of classic and new Pinball machines!

Click to check out the International Pinball Machine Database listing on this pinball machine.