The Dr. Mario arcade game is a multiplayer, puzzle/action game. The game was released in July of 1990 and designed by Gunpei Yokoi, creator of the Game & Watch and Gameboy hand held systems. The game’s music was composed by Hirokazu Tanaka. The original Dr. Mario also inspired several ports to additional Nintendo systems: including the Nintendo Vs. System and Playchoice-10.

The premise of this famous puzzle-game is a fairly simple one. At the opening of the game, Mario is introduced to players as a doctor, complete with a white lab coat and head mirror, doing research on deadly viruses. The viruses escape unexpectedly and it is left up to Mario to once again save the day. Armed with a medicine of his own creation, Megavitimins, Dr. Mario then teams up with Nurse Toadstool and sets out to destroy the escaped viruses before they run amok  in the Mushroom Kingdom Hospital.

Though it could easily be mistaken as simply a remake of older sliding and falling puzzle games, Allgame Magazine summed it up well, “When puzzle games were flooding the market, Dr. Mario stands out as one of the best, combining a smooth learning curve, playful graphics and memorable tunes,” and “fundamental concepts may be simple but the addictive gameplay becomes progressively more  complex as the speed increase and additional viruses are added.”

Before beginning, players can set the game’s difficulty-level. Depending on the selection, the speed of the game may drastically increase, making it much more difficult to arrange Mario’s Megavitimins before losing the level. The game over screen is reached by either destroying all of the viruses on-screen or by filling up the jar. Player scores are calculated based upon the amount of viruses eliminated. No additional points are given for completing a level within a certain time-frame, but higher-speed levels award players more points over all.

In multiplayer-gaming mode two players can go head to head on side-by-side screens, competing to clear the field before the other player does. Players can gain the upper hand over one another by destroying multiple viruses at the same time or beginning a combo-chain. 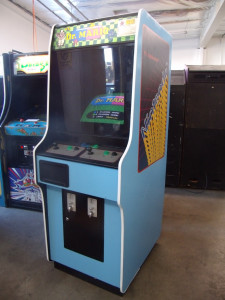