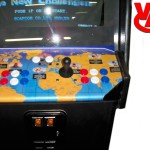 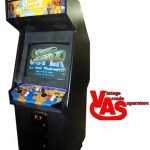 Here is a Super Street Fighter Arcade game for sale by capcom. In this Arcade fighting game hit, you can play as the previous fighters but this you get a brand new cast of character to choose from.  You can get this game restored like new for an extra $600.

Here is a Super Street Fighter 2 Arcade game for sale. This classic Capcom fighting game is a sequel to the Street Fighter Champion Edition. It features new characters and it was the first game on the Capcom CPS 2 system. In this version of the Arcade game it features a combo system so you can keep track on how many hits you give to your foes. One of the most significant aspects of this game is the New Challengers which includes Dee Jay, a kickboxing musician from Jamaica; T. Hawk, an indigenous warrior from Mexico whose ancestral homeland was taken from him by Shadaloo; Cammy, a 19 year old female special forces agent based from England with a secret past tied to M. Bison; Fei Long, a Hong Kong native who’s movie star who wishes to test his martial arts against real opponents.  This game was the first Capcom video game to use the CPS 2 system.  This game comes with a 25″ monitor.