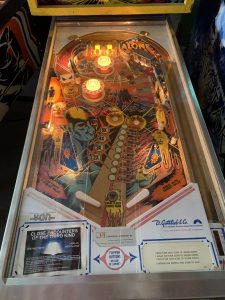 It has a beautiful backglass and the ball drain makes you work harder for a fulfilling run, which can make playing it super addicting!

Gottlieb’s flyer for the Close Encounters pinball machine describes it as:

A new adaptation of Gottlieb’s Exclussive Roto-Target presents an irresistible challenge to every player.

Green “hit” lights indicate which Roto-Target has been scored.

Electronic sound generator simulates the exotic sounds of the mother ship communicating with Earth humans in the “Landing Scene” of the movie.